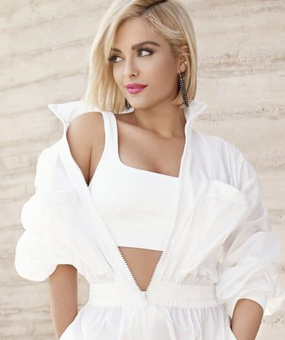 On a chilly December day right before the holiday rush, I’m at Smashbox Studios in Los Angeles waiting for the singer and songwriter Bebe Rexha to finish her photo shoot for this profile. I watch Rexha go through take after take and flow through pose after pose, hip cocked, balancing in stilettos with almost impossibly thin heels. As she works through each move expertly, it occurs to me that I’m watching a young woman eager to shape her own narrative, one who may not always have felt the agency to do so. At one point in the early afternoon, when a video team prepares to get some behind the scenes B-roll, Rexha grabs her phone and just films something herself. “Look how sick this is,” she says as she plays the footage for the rest of us, grinning, owning it.

It’s early evening by the time Rexha finishes the rest of the shoot, and as I sink into a long, low-slung gray sofa at the studio and get ready to interview her, I’m nervous that after such a long day she might feel too drained to peel back the bold layers on her surface and show me something deeper. But as she sits across from me, unspooling her truth into a tale of fear and resilience, I realize I didn’t need to worry. For the first time, Bebe Rexha is ready to share the depths of her story.

She doesn’t take long to open up. A few months earlier, in April, Rexha had tweeted to her 1.6 million followers that she has bipolar disorder. It wasn’t the first time she had acknowledged her mental health—her 2018 single “I’m a Mess” touched on similar themes—but it was the first time she’d referenced her specific diagnosis. “It did kind of fuck me up for a little bit,” Rexha tells me of learning that she had bipolar disorder, explaining that she spent a couple of days having what she describes as a breakdown. “I was very fearful,” she adds. “I didn’t want to think there was something wrong with me.”

I want to hear from Rexha in her own words, to understand why she decided to open up about the most intimate details of her life, why she decided she’d had enough and it was time for her to take control. Over the course of our interview, I learn that she had only just gotten official confirmation about the diagnosis in the days before she shared it with everyone else, after years of telling her family and therapist that she didn’t want to know. For most of the hour and change I spend curled up across from her, she keeps her deep brown eyes trained watchfully on my face. But she looks down when I ask why she feels it’s important to talk more openly about her bipolar disorder. She pauses, stroking the animal-print coat she’s draped across her legs to ward off the evening chill seeping through the window next to us. Each of her long, cherry-red nails comes to a fine point.

“That was my worst fear all my life: going crazy,” she says. “I felt like me opening up to my fans was me finally saying, ‘I’m not going to be imprisoned by this.’ And maybe it’ll make somebody not feel imprisoned, in that moment, if they feel like they’re going through a rough time. That’s why I decided to really open up and to free myself from that.”

Bleta “Bebe” Rexha was born to Albanian parents on August 30, 1989, in Brooklyn, New York. Originally trained as an opera singer, she was a successful songwriter before stepping in the spotlight herself, penning hits for a list of artists that would make for a most excellent concert: Rihanna, Eminem, Selena Gomez, David Guetta, and more. In 2010 she joined forces with Fall Out Boy’s Pete Wentz on the musical project Black Cards, then struck out on her own shortly after. She released her debut studio album, Expectations, in 2018. That same year she earned two Grammy nominations: one for best new artist, and another for best country duo/group performance, thanks to her collaboration “Meant to Be,” featuring the duo Florida Georgia Line. In 2018 she also founded the annual Women in Harmony gathering, which brings together female musicians, producers, mixers, songwriters, and other creatives in the music industry. And late last year she wrapped up a five-month stint opening for the Jonas Brothers’ Happiness Begins tour.

Rexha says it took her awhile to be comfortable with the idea of being a performer, rather than safely behind the scenes, in part because she felt pressure to follow a more traditional path—to scale back professionally, “marry someone in the Albanian culture,” and have children. “For me it was, How do I break out of that in my head and not listen to all the noise?” she explains.

END_OF_DOCUMENT_TOKEN_TO_BE_REPLACED

On Sunday (February 16) Bebe shared a fun moment with her personal trainer on Instagram Stories, seen hiking in the LA area. Bebe looked fantastic in her sports bra, yoga pants and her white headband. You go girl!

If it’s meant to be it’ll be. Bebe performed a wonderful set during the e1972 Show during New York Fashion Week in New York City on Saturday (February 8).

Yeeees! There’s no better way to restart Bebe Rexha Network than with a brand new layout. A huge thank you goes out to MPECreatives for the amazing theme in both, website and gallery. Do you enjoy this brand new look?

It’s the most musically time of the year. With the Grammys happening tonight it was no wonder to see Bebe attending the Recording Academy and Clive Davis pre-Grammy Gala in Beverly Hills on Saturday (January 25).

The Happiness Begins Tour finally officially kicked off on August 7 in Miami with Bebe as headlining act. From the first 3 concert lots of photos were added to the gallery.

Another day, another partnership. Bebe teamed up with Bebe. Sounds fun! Bebe has teamed up with the clothing brand Bebe to launch a special clothing collection with them. Bebe said: “It’s incredible to be part of this bebe campaign. It’s not only about me loving the brand, but more importantly about me loving myself. I hope to inspire and empower women all over the world with this message of self-love. I believe it is super important.” Also she said: “I grew up wearing bebe. It was the coolest piece of fashion you could have, so to be able to mix fashion and my music is so fun.” Find all details on bebe.com!

Bebe is here to provide you amazing nail polish! She teamed up with SinfulColors to create matte but with a silky rich finish and dramatic vampy shades nail polishes for you. The first collection is called Velvet Obsession and available at Walmart.

When it comes to love it should be mututal – Bebe loves us so let’s give it back to her by watching and sharing the official Harder music video.

Bebe and Jax Jones visited Kiss FM in London to promote their new single Harder. While paying a visit both sat down to play “Who’s Most Likely To” with some hilarious answers.